One of the most must visit places while in Beijing would be the Temple of Heaven. It is said that no visit to Beijing was complete without a visit here… and it is true… when you first cast your eyes on it, you can no help but marvel at the beauty of the place…

And this place is so beautiful and picturesque, there are many bridal couples or models around to take a picture or two.

Entrance to the Temple of Heaven costed about RMB35… and the compound was huge!!!

It is 2,700,000 square meters big, it is said to be even bigger than the the Forbidden City. Because the ‘Sons of Heaven’, which were the Chinese emperors would not and could not build a “home” for themselves that was bigger than the earthly residence dedicated to Heaven thus the difference in overall size of the two places. The Temple of Heaven is surrounded by a long wall.

The Temple is divided by two encircling walls into an inner part and outer part. The main buildings are located at the south and north ends of the middle axis of the inner part. The most magnificent buildings are naturally the Circular Mound Altar (Huanqiutan), the Imperial Vault of Heaven (Huangqiongyu) and the Hall of Prayer for Good Harvest (Qiniandian) from south to north. 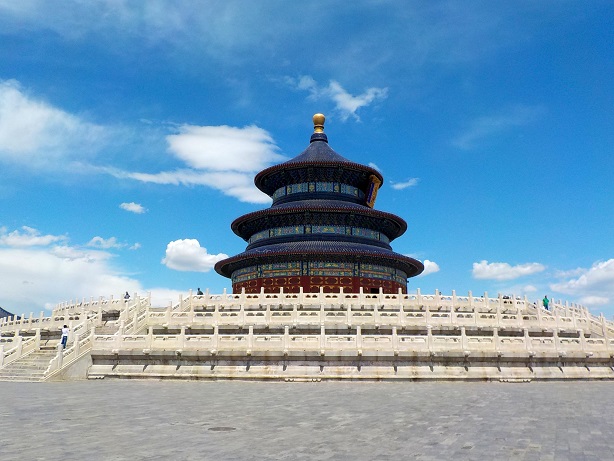 I missed out on the first two as my daughter, Talia and I headed to the biggest and most obvious building, the Hall of Prayer for Good Harvest (Qiniandian).

The Temple of Heaven is said to be the most holy of Beijing’s imperial temples. And  I heard it is described as “a masterpiece of architecture and landscape design” and looking at it, it is so easy to see why!!!

In case you did not know it, the Temple of Heaven has also been listed as one of the World Cultural Relics by the UNESCO. 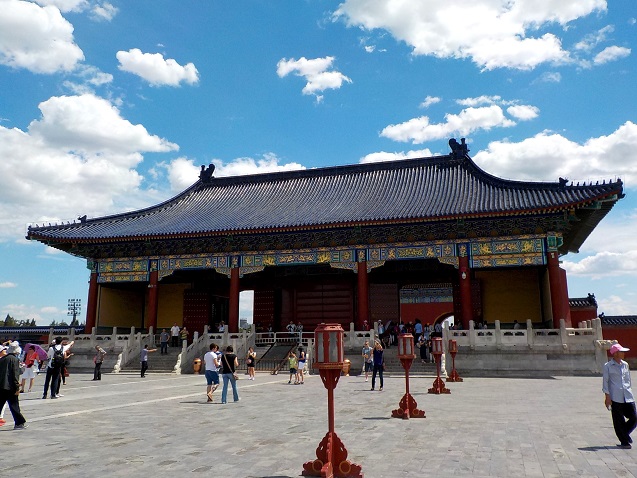 The Temple of Heaven was built in the Ming Dynasty (AD 1420) by the emperor Zhu Di in the royal garden. Once a year, during winter solstice, the emperors will come here to worship Heaven and to solemnly pray for a good harvest.

Since an Emperor’s rule was legitimized by a mandate from Heaven, a bad harvest could be interpreted as his fall from Heaven’s favor and threaten the stability of his reign. So, it was not without a measure of self-interest that the emperors will fervently pray for a very good crop for their country and subjects.

In line with the Confucianist revival during the Ming dynasty, the sacred harvest ceremony was combined with the emperor’s worship of his ancestors.

According to the Confucian pattern of social organization, just as the emperor respected his ancestors, so a younger brother should respect an elder brother, a wife her husband, a son his father, and a nation’s subjects their ruler.

Both the railings and the large flat slabs separating each of the staircases to the Hall of Prayer for Good Harvest are carved with dragons, phoenixes and cloud scrolls depicting the ascent of the dragon and the phoenix. I find these so magnificient… and to think all these are hand made.. they did not have machinery and computers and such in the past…after all….

The design of the Temple of Heaven complex, reflects the mystical cosmological laws said to be central to the workings of the universe. Both the overall arrangement and the buildings themselves reflect the relationship between sky and earth, the core of understanding of the Universe at that time.

The Hall of Prayer for Good Harvests is a very strikingly beautiful building; round, three-tiered and with blue tiled roofs. It is  about 38 meters tall and sits on a three-tier marble terrace. The amazing building was build purely on impressive and awe inspiring carpentry, with no nails used. Yeah, you heard me right… there were no nails used in this temple at all.. Isn’t that like such a huge feat!!

This design, was commissioned by Qing dynasty emperor QianLong  in 1751.

If you are wondering what the inside looks like…. this is it… 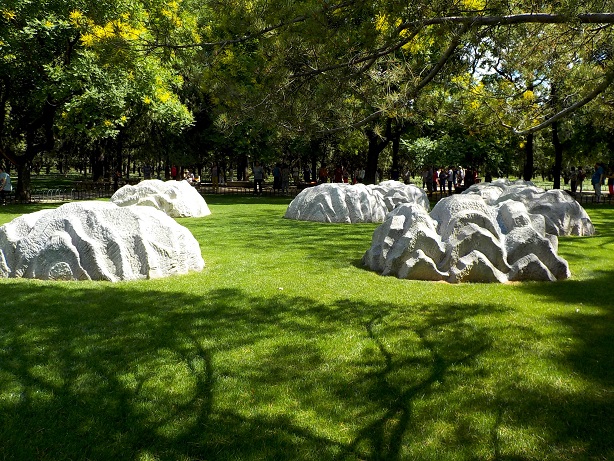 Anyway, while headed back out of the temple, we came across an interesting place located near the entrance/exit to the main Hall of Prayer for Good Harvest. There is a set of seven stones on the ground. It might be missed out on but it was said that these unassuming white rocks are great examples of two important aspects of Imperial history

The first story set during the Ming Dynasty, tells of the emperor was having difficulty deciding on the new location for the temple to be built. One night he dreamt that the stars in the big dipper constellation fell from the sky, and turned into stones on the ground.

Such visions were seen as signs from the heavens and were taken very seriously. The emperor immediately ordered these stones to be found, and the new temple was then sited there.

This legend has stood throughout time, enhancing both the auspicious nature of the temple as a location to communicate with the gods, and confirming the belief in such signs and symbols given to leaders and to the people.

Then another story of the origin of the stones,also demonstrates a very important part of Imperial history – the installment of the new Qing dynasty and the change of rulers to the Manchus.

The story tells that seven stones were placed there to represent the seven peaks of the Tai Mountain in central China. This was a place traditionally used for worship of the Heavens and communication with the Gods, long before the Temple of Heaven was built for the same purpose.

When the new rulers of the Qing Dynasty came to power, they were well aware they needed to demonstrate unification of China. Coming from the North Eastern Manchurian region, the new Emperor needed to re-enforce his identity and link with the rest of China. This was done in many ways, but these stones are one of the great remaining examples.

The story tells that the new Manchurian emperor had an eight stone added here, to symbolize the Chang Hai Mountain in his home region. This was put alongside the seven stone of Mount Tai, to symbolize to the people the unification and togetherness of the regions.

In the temple compound, it is believed that there are over 60,000 varieties of trees. And well, you can see a lot of ancient cypresses…. and among those, the most famous tree is a grandfather tree – a 500-year-old Nine-Dragon Cypress with branches like nine dragons winding with each other. I did not see it, being hard pressed for time and exhausted beyond anything, but my daughter took a picture with one of these ancient cypresses… Don’t you think the tree trunk is just so full of character and fascinating….

So, how to get there to the Temple of Heaven? Take the Line 5 Subway to the Tiantan Dongmen Subway Station and exit from Exit A and facing the road turn right, do not turn left , because you will end up on a longer route like I did!!!!

For more info, check out: http://en.tiantanpark.com/default.aspx