When traveling, I for one will appreciate anything convenient, time saving and cost saving, and personally for me, I have been on several Hop on and Hop off buses especially when I was in Paris and also in  London.. and that was years before the KL hop On Hop Off City Tour…

We want to relax and enjoy our holiday while getting to see as much of all the popular local attraction as we can without busting our budget, right, so believe me when I say that the KL hop On Hop Off City Tour is really worth it and definitely so much cheaper then getting a tour guide to bring you around when there is only one or two of you or a small family… 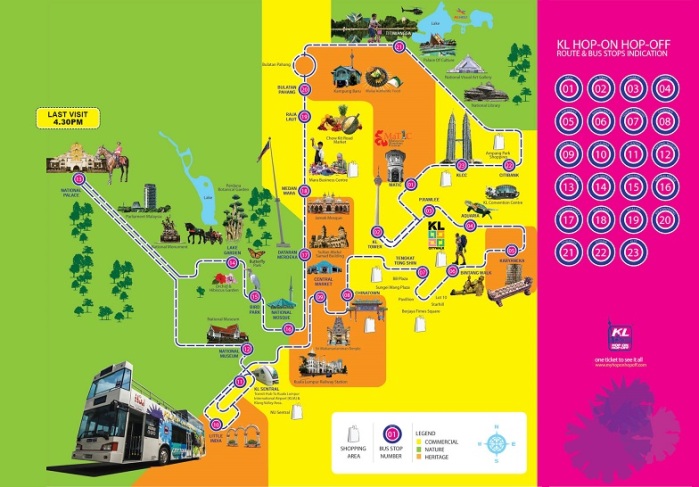 After all you just need to pay RM45 /USD11 per adult or RM24/USD6 per child and you can go on a “free and easy” city tour that has 23 stops covering more than 70 attractions anytime within 24 hours….. Where else can you get that deal….

The KL hop On Hop Off City Tour which is operated by Elang Wah Sdn Bhd celebrated their 10 years anniversary carnival style in the presence of Yang Berhormat Dato’ Seri Mohamed Nazri bin Abdul Aziz, the Minister of Tourism and Culture of Malaysia; Tuan Mohd Akbal Setia, the director of Tourism Malaysia Kuala Lumpur and Tuan Zain Azrai Director of MATIC where they first began, at MATIC….

Afterall, it was 10 years ago when the first fleet KL hop On Hop Off City Tour was launched by the then Minister of Tourism of Malaysia Yang Berhormat Datuk Seri Tengku Adnan Tengku Mansor.  at MATIC Kuala Lumpur…  It was also 10 years ago when the then Mayor/Datuk Bandar of Kuala Lumpur Yang Berbahagia Datuk Ruslin Hasan whom have allowed KL Hop On Hop Off City Tour to share this beautiful city with millions of visitors….

The KL Hop On Hop City Tour has played host to about a million tourists from all over the world…since launched on 28th December 2006 and the goal to be the City public tour that link all major attractions in Kuala Lumpur is just that and so much more…. Now, almost everyone knows that one of the best ways to check out Kuala Lumpur would be to hop on and ride to see our beautiful city with the KL Hop On Hop Off.

Despite Kuala Lumpur’s humidity and rainy spells, hopping on one of the open deck double decker buses is just one of the best experience a tourist can do to visit the places of attractions and activities that authentically represent the stories and people of the past and present in Kuala Lumpur

You can get your tickets on the Hop On Hop Off bus, online at their website, authorised ticket agent/ hotes, or at the first stop which is of course, at MATIC