Executive Chef Kok Chee Kin will be presenting the masterpiece of Chinese cuisine, the Beggar’s Chicken or also known as the Emperor’s Chicken, a dish fit for royalty at the now Pork-Free  Dynasty Restaurant from 6 April to 11 May 2017 …. 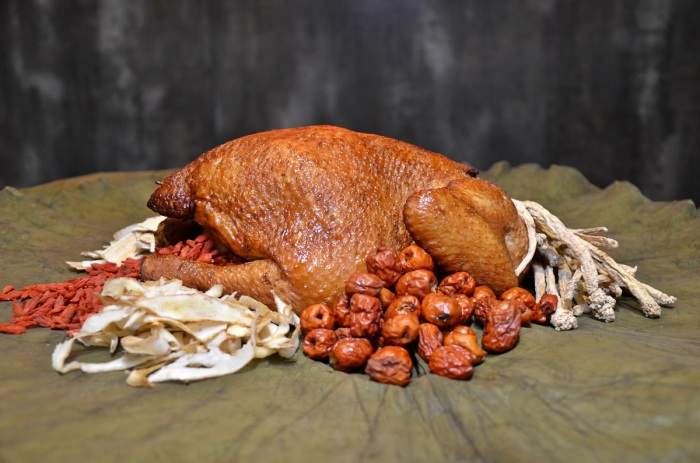 With the Year of the Rooster gearing into the second quarter, impress your family, friends or business associates as you enjoy this traditional dish with choices of Emperor’s Set Menu.

Originating in China during the Qing dynasty, it is believed that a starving beggar once stole a chicken and hid it in the mud. When he returned to retrieve the chicken later, it was covered in mud. He started a fire and placed the entire mud-wrapped chicken into it as he had no cooking utensils. As the chicken was roasting, a clay crust formed around it.

When the beggar cracked open the crust, the feathers fell off the bird revealing its aromatic and tender meat. The Emperor who was passing through stopped to dine with the beggar and declared the dish so delicious it was added to the royal menu. 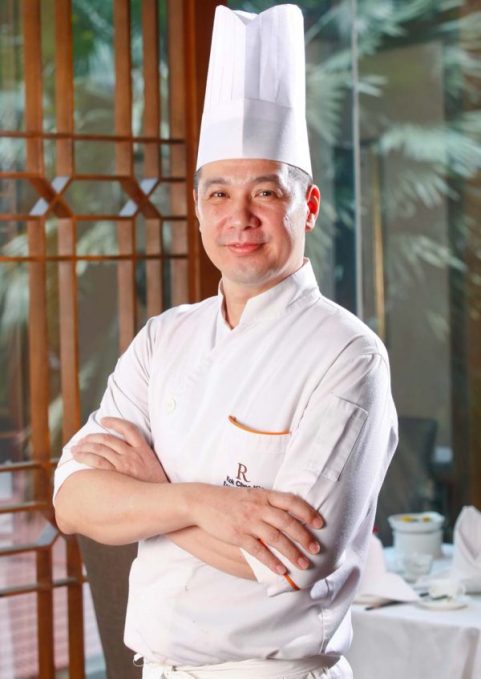 Available for lunch and dinner, Chef Kin offers 2 versions of this well-loved royal dish – steamed or baked. The chicken is steeped in aromatic herbs and Chinese spices the day before and undergoes a quick deep-fry to brown its skin. It is then wrapped in lotus leaf followed by a tight layer of aluminium foil to contain its flavors and retain the juices, and steamed for 4 hours before it arrives at the dining table.

Prices start from RM38nett for half a chicken and RM68nett for a whole chicken. A 24-hour advance order for the Beggar’s Chicken is required.

For a complete culinary experience, ask for any of the 5 Emperor’s Set Menu inclusive of a Beggar’s Chicken. The Emperor’s Set Menu starts at RM138nett per person for a minimum of 2 persons dining or RM1,888nett for a table of 10 persons.

For reservation and restaurant enquiries, please call 03 2716 9388 or email rhi.kulrn.fb@renaissancehotels.com.

Divana Scentuara Spa is a gorgeous garden home Thai boutique spa surrounded by almost an acre of tropical garden offering the experience of divana oriental organic spa once you step your foot right in the green vicinity.... . From oriental organic ingredients, exceptional tailored-made designed treatment programs up to the well-trained therapist, Divana Scentuara Spa offers a heavenly relaxing experience and more... . Get your spa package from @kkdaymy . #travelwithkkday #kkdaytravel #amazingthailand #livelifelah #instatravel #selfpamperingtime #travel #travelgram #spa #tourismauthoritythailand @tourismthailandkl . Check out more KKDay deals at https://www.kkday.com/en?cid=8700 (link in my bio)
What better way to spend my #chinesenewyear2020 then at @sunwaylostworldoftambun with some of the people who means a lot to me.. @_nsyfq @izrylwilson and @firdauzain ... . Check out the new Malayana Rain Fortress where there are an additional 12 slides... And of course the Hot Wheels and Barbie Lucky New Year event... . Thank you guys... . #livelifelah #lostworldoftambun #VisitMalaysia2020 #VM2020 #mytravelmediabuddy #ipoh #wheretogo #cuticutimalaysia #themepark
Chinese New Year Eve spent with loved ones can be meaningful and sweet.. . Am glad to be spending my Chinese New Year Eve and also CNY with my daughter @_nsyfq and also my dear younger brother @izrylwilson at the lovely and cosy @weilhotel . Gong Xi Fa Cai everyone and may the new year bring us great new beginnings, more wealth, prosperity, happiness and all... . #weilhotel #weilhotelipoh #VisitMalaysia2020 #VM2020 #mytravelmediabuddy #cuticutimalaysia #malaysiatrulyasia #ipoh #perak #staycation
(swipe for video) So many reasons to love and subscribe to MY100 or MY50 unlimited pass... . Let me share some reasons...so lets start saving on your commute and at the same time stand a chance to win iPhone, iWatch and iPad as well. . And 1 whole year of free travel on any RapidKL MRT, LRT, BRT, Monorail and Buses!!! 📷: @masstefano . #iwantmy100 #iwantmy50 #rapidkl @rapidkl
Decisions, decisions... A lazy day in the lovely pool or shall we head out to the city to explore... 😬🤔 . This lovely pool is at the @grandchinahotel and oversee a stunning view of Chinatown Bangkok and beyond... . Address - 215 Yaowarat Rd, Samphanthawong, Bangkok 10100 . #instatravel #travelgram #amazingthailand #tourismauthoritythailand @tourismthailandkl #bangkok #chinatown #livelifelah #wheretogo
Always say yes to new adventures especially with gorgeous #natgeobags ... Am so loving my National Geographic luggage... These iconic luggage is beautiful, and of premium quality but affordable... . The luggage is easily maneuvered with the four 360 degree double spinner silent traction wheels and easily pulled around with the durable aluminium trolley system with push button... . I love the interior which is beautifully lined with National Geographic woven label and comes with straps and one U shape divider with zipper pockets.... . Best of all, this durable and classy luggage comes with anti-theft zippers and TSA recessed lock so you can fully secure your belongings with this luggage... . My trip to Bangkok, Thailand was a bliss with this gorgeous luggage which drew admiration stares... Thank you @travishegel @gotraveloutdoor . #natgeobags #natgeostoremy #luggage #livelifelah #travelgram
Music plays such an important part of helping me release stress.. It is a necessity in my life... . JOOX VIP Holiday Trilogy Promo now is in the endgame! This is the perfect time for you to join in the JOOX VIP family! Only RM12.90 for 6 months, and a measly RM37.90 for a year! Ad-Free Listening can be yours for a low as RM2.15 a month. Grab your deals today before it's over! . (Peluang terakhir untuk anda dapatkan promosi Cuti Trilogi JOOX. Jadi VIP sekarang dengan hanya RM12.90 untuk 6 bulan, atau RM37.90 untuk setahun! Nikmati muzik tanpa iklan serendah RM2.15 saja sebulan. Jom, rebut peluang sebelum terlambat!) @joox_my #JOOX #JOOXMY #JOOXVIP
(swipe to see video /wanted to put in IGTV but my video got out of proportion) It feels surreal being onboard a beautifully restored antique rice barge, cruising down the River of Kings that is the Chao Phraya River dining on sumptuously prepared cuisine from the @anantarariverside but that was how I spent my evening yesterday, thanks to @kkdaymy . #travelwithkkday #kkdaytravel #amazingthailand #livelifelah #instatravel #chaophrayariver #travel #travelgram #cruise . Check out more KKDay deals at https://www.kkday.com/en?cid=8700 (link in my bio)